Anointing is an activity present in many religious systems around the world, from the earliest times of civilization, until our day.

It is a practice associated with blessing, ordination, purification, and healing. In essence, it is a ritual act in which aromatic oil is used to ’anoint’ a person.

Typically, a person’s head or body is being poured over.

Aromatic oils have been used for millennia now, for sacred and medicinal purposes, as a perfume, or as protection from negative spirits and energy.

The act of anointing takes a prominent place in Judeo-Christian tradition, but also in many other religions and belief systems preceding and following the emergence of this particular one.

Aromatic oils were used for similar purposes since antiquity.

Anointing of hands is a ritual meant to confirm someone’s overall readiness to perform some kind of sacred duties.

For example, a newly ordained priest would have his hands anointed, as a confirmation of his spiritual purity.

The significance of hands in cultural traditions around the world is huge, due to very simple and logical reasons.

We do almost everything by using our hands. All the good and the bad deeds are done by human hands. Hands have powerful symbolism.

Therefore, the act of anointing of hands would have a deep and purposeful meaning.

If you wonder what the anointing of hands means, if you have seen it or, for example, had a dream about it, what follows might interest you.

Apart from our ability to express ourselves through speech, when we interact with one another, a great part of our communication skills is actually non-verbal.

We use facial expressions to tell if we were pleased or disgusted, annoyed or amazed, happy or sad, and so on.

We use as many gestures as you can imagine expressing all kinds of our emotional states, ideas, thoughts, or whatsoever.

We gesticulate while we speak, in order to clarify what has been said, to add a more dramatic effect to our words, or our involuntary gestures simply speak for themselves.

We meet by shaking hands, creating a physical bond with someone, even for a brief moment. We reject an offer by a gesture, as well.

We use our hands to indicate our happiness and joy, to show compassion, affection, and love.

We use them to threaten, dismiss, deny, reject, and demand, as well. We use our hands to summon, bless, and anoint.

Our hand gestures reveal our fear, detestation, aversion, or defensiveness, as well as the opposite.

We swear honesty by using our hands, we make promises, and deals, and seal alliances. We salute by raising our hands, and we appreciate by clasping them.

The hands of a human being can tell about their way of life, their self-care, their health status, their social status, their work, and even their nature and temperament, to some point.

If a part of our body could be said to speak, it would be our face and our hands.

Beliefs and Cultural Meaning of Hands

In different cultures, hands are associated with specific acts, rites, and meanings.

There are also many superstitions regarding hands, all over the world. The use of hands and their symbolism is culturally shaped.

For example, in the Buddhist tradition, specific hand positions known as mudras express the transfer of divine energy.

In India, hand-painting with henna is a typical element of the traditional wedding ceremony.

In Asia, the left and right hands are associated with yin and yang energy; the left hand represents yin, while the right stands for yang.

Together, they stand for unity, friendship, and alliance.

Hands have always been associated with our bodily desires, being a very common trigger of attraction between people.

They can send a very powerful message when it comes to that. Touch is what we greatly desire from some people.

Hands are very carefully depicted in the art of some of the greatest painters and sculptors of all times.

Perhaps one of the most famous hand-depiction in art history is Michelangelo’s Creation of Adam. Durer’s drawing of hands in prayer is of no less significance, just as Da Vinci’s Mona Lisa.

There are countless superstitions associated with hands. You probably know at least some of them.

For example, those of the kind: if your left palm is itching, you will receive (or lose!) money and such.

You have probably heard about chiromancy, the palm-reading. It is a divination practice, in which a person’s destiny is thought to be written in the palm of their hand.

It is a very old and complex practice, associated with astrology, and much more.

Therefore, the act of anointing of hands has a powerful significance.

Before we move on to that, let us discuss the purposes of the act of anointing. 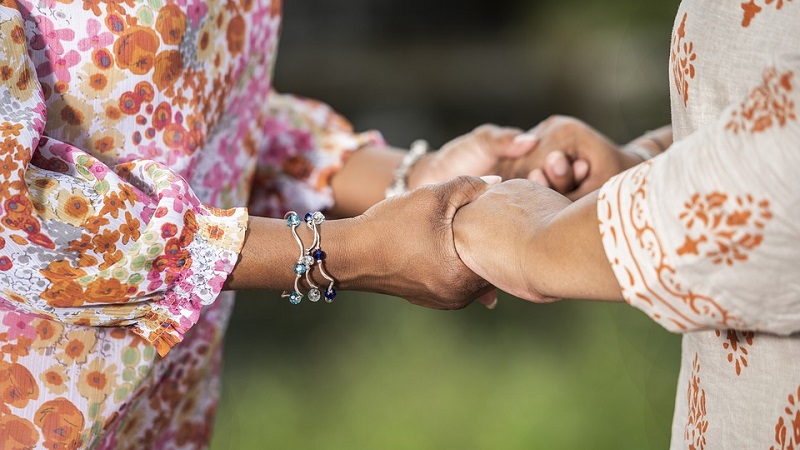 The act of anointing is a simple act of pouring aromatic oil over someone’s head or other body parts.

Simple as it is, it has a rich significance and many purposes, with an emphasis on healing, religion, and customs of hospitability.

Researchers assume that the act of anointing was first associated with health before it gained a sacral, religious meaning. It was associated with bathing and sanitation.

For example, olive oil has been used to heal wounds and it was also applied to sick people.

There is also a possible cross-purpose of using anointing for battling diseases, but also demonic forces.

Oil anointment can protect the skin from sun damage and it also serves as a perfume, masking unpleasant odors.

Bodies of deceased people could be anointed, for more than one reason, both religious and sacred, and sanitary.

When it comes to hospitability customs, Ancient Egyptians, Greeks and Romans would anoint their guests.

The same goes for Hebrew people and Arabs; in Arabic culture, the custom of anointing guests survived to the twentieth century.

Speaking of religious anointing, we could possibly trace the ritual to prehistoric times. Animal fat and blood were often used in the practice.

However, in traditions in which there was no animal sacrifice anymore, oil would be used.

The practice of anointing for religious purposes could be found in Ancient Egypt, India, Buddhism, Judaism, and Christianity, including different confessions.

In Judeo-Christian tradition, the anointing of priests is a very significant act.

What about the anointing of the hands? When it comes to religion, the hands of the new priest would be anointed, to confirm that he is ready to perform sacred duties.

It is a blessing that allows the priest to touch and use sacred vessels, and anoint those in need.

The act of anointing by a priest is an act of blessing. Priests would anoint sick people, to help them heal.

Hands are the most hard-working and the most symbolized part of our body, one could say.

Not only that, but hands play an extremely important role in communicating our ideas, concepts, feelings, and much more. Hands communicate our intentions.

The act of anointing of hands in general could be associated with the aforementioned example of the priest.

Anointing means confirming, allowing, and blessing. Anointed, your hands, in a way, get more power than you had before.

When hands are anointed, they could be in touch with what is considered sacred and divine.

In a way, the act of anointing hands could be understood as a blessing to one’s future deeds, both an act of spiritual support and confirmation.

One should not perform bad deeds if their hands were anointed. The anointing of hands is also associated with purification, honesty, truth, and righteousness.

It gives one rights that should not be misused and taken advantage of.

Dreams About Anointing of Hands

If you have not seen the act of anointing and you are not the one whose hands were anointed in real-time, you could have a dream of such an act.

What does it mean to dream about the anointing of hands?

If you dream about being present at the ceremony in which someone’s hands were anointed, think about how you felt about that situation.

All dream details matter. The act of anointing of hands is considered sacred, and associated with power, wisdom, healing, and more.

If you had a dream about a bad person getting their hands anointed, it could reflect your thoughts about certain people who took advantage of their status or got something they were not supposed to get, because they did not prove they deserve it.

Nevertheless, they’ve got power, and it is something that bothers you in your waking life.

You probably feel as if you cannot do much about it.

However, do not let it drag you down. Continue your mission and prove your worth in your own, noble way.

If you dream about someone you find deserving and admirable getting their hands anointed, or the situation makes you feel so, it is a good sign.

It reflects your positive ideas about what is happening around you.

You are aware of people who deserve to be awarded for something they do.

You rejoice because of their success, which is incredibly virtuous.

Alternatively, you may think someone deserves to be awarded and blessed, which is not happening in waking life.

Maybe you think it should be yourself, even.

Now, what about your own hands being anointed?

Dreams About Your Hands Being Anointed

This dream is not common and it could have a powerful meaning.

This dream could potentially have a very positive meaning.

It means you will be chosen to do something important and responsible because you deserve it for your talents, skills, efforts, and more.

Maybe you are not feeling ready for such a task, and your dream is in service of preparing you for some major change.

Think about how did you feel during the act. Did you feel super-energized or tired and scared?

If the latter were the case, the dream could suggest you will be chosen to do something you do not really want to do.

However, you could prove great in this task and help many.

Such a dream is usually associated with a task and power given to someone to do something for the greater good.

If you feel negative about the act in the dream, as if you do not belong to that ceremony, you may have been struggling with the feeling of not being good enough, of not deserving what others believe you do deserve.

On the other side, if you feel great about it, it reflects your readiness to accept the duty and be up to the task, which might be heavy, but still blissful and divine.

You May Be Also Interested in These Topics: Blue Jay Feather Meaning | Blue Light In Meditation

How To Manifest Friends and Friendship?

How to Manifest Someone To Text You?