The wonderful world around us is full of many lovely and colorful inhabitants, such as various species of animals, including millions of bird species.

Birds have always had a prominent place in cultures around the globe, in mythology, folklore, and religion.

Blue jays are not an exception. This charming little fellow is a harbinger of hope and joy, considered a bird with a very high spiritual meaning.

A passerine bird from the Corvidae family is easily spotted by its striking blue feathers.

Feathers of a blue jay are associated with a whole palette of mutually connected spiritual meanings.

Let us break it down, by first getting to know these lovely blue-feathered fellows.

However, some of the blue jay populations change places, although there are resident ones, as well.

While they mostly breed in the woods, these Corvidae, like some of their family relatives, are commonly seen in urban areas.

Blue jays are easy to notice. Their feathery coat is of beautiful azure color, with a bright blue tail, marked by black stripes.

Their chest is snowy white, such as their under-feathers. The lovely bird has a black collar and a black stripe on the head, and a charming crest.

Interestingly, in this specie, male and female birds look very similar to one another.

Both of them work on building nests in trees. In trees, blue jays find their food, as well, mostly feeding on seeds, nuts, fruits, acorns, or anthropoids. Sometimes, they would catch a little vertebrate.

Blue jays are not to make the joke with when it comes to the birds’ kingdom.

They are known to be aggressive towards other ones, harassing their nests and even attacking other birds, even killing them.

They sometimes eat the eggs of other birds.

Blue jays have an interesting habit. They mimic hawks’ call. It seems the red-shouldered hawk is their specialty.

Why do blue jays do this? There are two possible explanations: either they warn fellow blue jays that a dangerous one preys around or they scare others by pretending they are hawks!

We call them blue since their feathers appear strikingly – blue.

However, their feathers are loaded with melanin and this pigment is not blue, but brown.

The color we see is a play of light, which scatters through special feather cells, and to our eyes, they appear dramatically blue.

Blue jays got their name because of their noisy nature. They are not the only birds called jays; some of their family members are called the same.

Blue jays seem to have a long lifespan. The oldest known bird was about twenty-six years old, if not older. 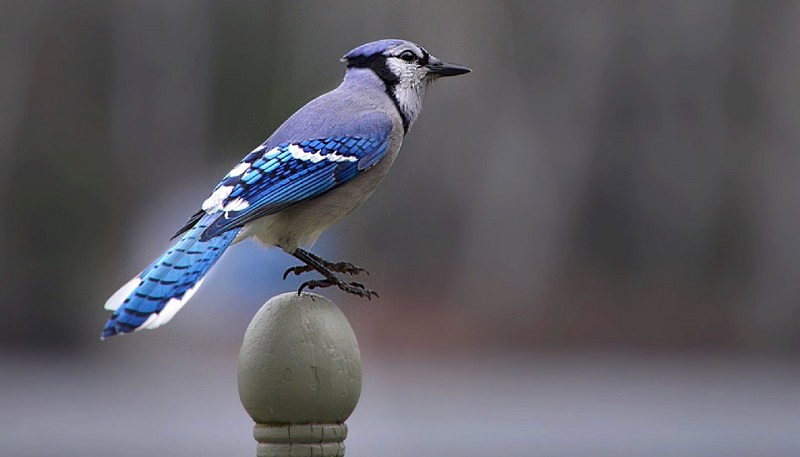 Blue jays are associated with spiritual powers. African American traditions from the southern parts of the United States regard blue jays as powerful spiritual beings.

In fact, in some of the folktales, blue jays are associated with the creation of the solid earth.

According to the tale, it was a blue jay that brought a small amount of dirt into the world made only of water.

It made the land, by bringing the first particles of it.

In some other tales, blue jays are associated with the Devil himself, serving him.

According to this strange belief, on Fridays, the blue jay collects twigs for the fires of Hell, to bring it to bad earthlings!

On Saturdays, it is not on duty and its song is pleasant and joyful, throughout the day.

Blue jays are popular amongst baseball teams and some of the well-known universities, often being represented as a symbol of the team or a mascot.

The charming bird is also present in fiction; the most widely known one is Mordecai, a character from an animated series in America.

What does a blue jay mean as a spirit animal? What is the guidance this blue bird brings?

The blue jay has a wonderful message for all of us, in terms of symbolism and spiritual meaning.

This blue-feathered fellow encourages you to trust your inner voice and listen to your feelings.

It is a lovely, beautiful, charming, and playful little fellow, yet cunning, fierce, daring, and even aggressive.

The blue jay as a spirit animal teaches us to trust our guts and follow our path, regardless of how unconventional it may seem at times.

It inspires curiosity, and playfulness, but also seriousness and wisdom.

It is about self-integrity and personal values and freedom.

As a spirit animal, the blue jay inspires us to follow our feelings, when it comes to important decisions in life.

It requires great courage to do so and stand above mediocre values.

The blue jay spirit animal encourages us to use our wits, when necessary.

The blue jay is a little trickster, we have to admit. It imitates a dangerous hawk for its own ends. Well, in life, sometimes we have to use a bit of trickery.

However, it is a true mastery to decide when and how to pretend a bit; there is no purpose in straight-out lying and deception, it always returns to the liar.

However, there are situations when we have to compose ourselves a bit, even if we do not feel as brave or strong as we would like.

As a spirit animal, the blue jay teaches us to accept the bright side of life and to recognize little miracles in our lives and the world around us.

Its originally brown feathers turn into magnificent blue, thanks to the magic of sunlight refraction.

There is magic in this life, indeed, and the blue jay spirit animal wants you to recognize it and take joy in it.

The blue jay teaches you to trust your feelings and intuition, to be a strong character, full of self-respect and self-admiration, but not arrogance.

It also inspires us boldly to express our creative ideas and potential.

If blue jay appears to be your spirit animal, you probably have an incredibly rich imagination and a lot of creative capacity and potential.

Many creative people are afraid to express themselves, anxious if the world would accept them.

Well, the world accepts everyone and the universe encourages creators, no matter how opposite it may appear at times, in this earthly life.

It encourages us to accept our peculiarities and not become offended and broken if not everyone would find us ‘appropriate’.

As blue jay is a flying one, its spiritual meaning is inevitably associated with the heavens, higher wisdom, knowledge, spiritual journey, and enlightenment.

It is a spiritual guide through one’s soul elevation and spiritual progress.

A bird of magically blue feathers, the blue jay is a messenger that connects realms, the realm of our earthly existence with the higher one.

Its guidance is meant to help us find the balance between what is here and now with what was and what is to come.

Overall, its spiritual powers are incredible and mostly associated with independence, intuition, wisdom, finding ways to express ourselves, embracing our qualities for their uniqueness, and following our path, by nurturing our intuition. 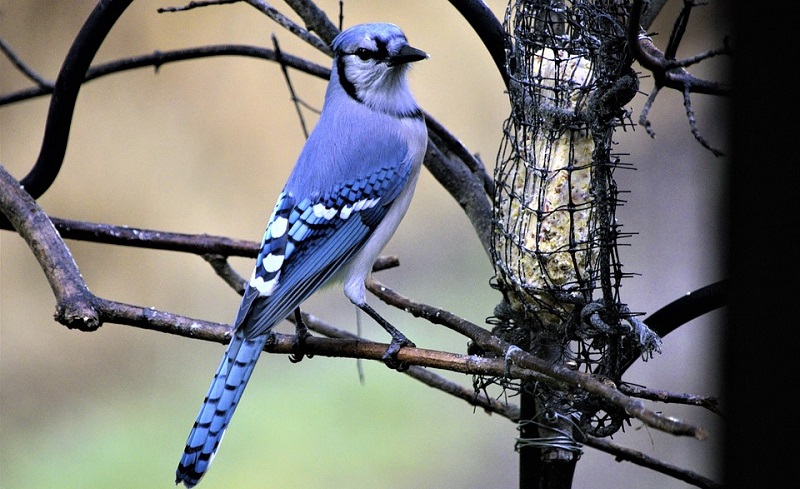 While the symbolical meaning may vary depending on its original owner, we could speak of some universal feather meanings.

In various world cultures, a feather is considered an omen, a sign from another realm.

A white feather, for example, is associated with angels and heaven.

In Native American traditions, feathers are often taken as a sign of deserved honor, an award, or a mark of one’s status.

Some of the tribes would award feathers to their fellow members for their achievements.

Native American tribes would use feathers in their various rituals.

Feathers could be used in rituals associated with healing, the calling of rain, protection from negative forces, and restoration of balance.

In Christianity, feathers also play an important role. Ostrich feathers are featured in liturgy, being light and smooth.

Fans made of beautiful peacock and ostrich feathers, flabella, are used in liturgy, meant to keep the insects away from the consecrated blood and body of Christ.

A feather from a specific bird would have a unique meaning within the totality of feather symbolism and spiritual powers.

For example, an eagle’s feather is associated with bravery and power, a dove’s feather, with peace and purity, a raven’s feather could be a bad omen, and so on.

Apart from the feather owner’s general meaning, the very color of the feather adds to its symbolism and spiritual meaning.

Blue jays’ feathers appear blue, through a play of light. What is the spiritual meaning of the color blue?

The blue color is associated with some of the vastest spaces known to us, the sea and the sky.

The color blue, associated with water, has much to do with our emotions and imagination.

Blue planet, Neptune, in association with the highly imaginative and intuitive Pisces, is associated with creativity, imagination, dreams, and intuition, but also with illusions and deception.

We say we ‘feel blue’, when we find ourselves a bit gloomy, especially if there is no obvious reason for that.

Blue is the color of melancholic poets, those who feel as if they do not fully belong to this world.

On the very positive side, the color blue is calming, and serene and it represents honesty, peace, and tranquility.

It is connected with the inner self and one’s spiritual journey.

The color blue has a soothing effect and it brings us into a state of relaxation.

Seeing a blue feather or dreaming about one could have a very deep meaning, in connection with the state the one who sees is in.

While there is a general meaning of blue feathers, just as those about feathers alone or the color blue, the concrete meaning always depends on the individual case.

What does it mean to see, find or dream of a blue jay feather?

Let us check out the most common symbolic and spiritual meanings of the blue jay feather.

These birds are known for their incredibly resourceful nature and the ability to save themselves and their kin from dangerous situations by using clever tricks – such as imitating a hawk’s call.

You certainly have some incredible skills, but you should probably work on them.

The blue jay feather is a sign you will get a little help from the universe.

If you have been working on something for very long and you still do not see any result, the feather of a blue jay is a good omen.

It means you should definitely keep going and results will be incredible, in due time.

If you have been struggling with making the first step towards something you wish, which, to be true, many of us do, a blue jay’s feather should be taken as a sign of heavenly support and guidance.

Gather your spirits and take a step forward.

Blue jay feathers stand for optimism, a positive approach to life, and the lightness of spirit gained through higher wisdom.

If you feel a bit down and as if nothing makes sense, the feather of a lovely blue jay reminds you to list your spirits and think positively.

Easier said than done, true, but when the universe sends you a sign, you should not overlook it.

There is magic in this world, remember.

The magical blue jay’s feather should always remind you of the incredible wonders of this life.

Blue jays tend to be a bit self-centered birds, even aggressive to other species.

In that sense, a feather of a blue jay sends this message: it is important to value yourself and stand for your ideas, opinions, and everything you hold dear and important in life.

The blue jay feather is also a sign of protection from above.

In general, feathers are associated with heavenly spirits watching over us.

Seeing a feather or dreaming about it is a reminder of some higher presence in our lives.

You May Be Also Interested in These Topics: How To Manifest Someone To Be Obsessed With You? | Blue Light In Meditation

How To Manifest Friends and Friendship?

How to Manifest Someone To Text You?